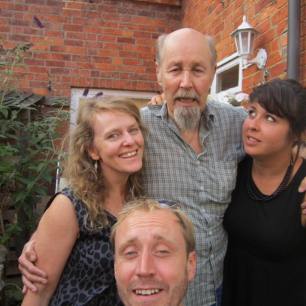 I love this photo of me and my husband 6 months ago today, in our tiny courtyard garden during the prosecco and spring rolls post-marriage ceremony reception for about 20 people, which we insanely thought it was a good idea to host in our impossibly small house. There is a reason people don’t invite you to their house on their wedding day. Nevertheless this had special significance for us, as this house was the last house my Dad lived in, and he died in the room behind us in the photo. I spent a large chunk of my life without my Dad in it: 5 years of living together, 10 years of sporadic weekend-ish/phone contact, 10 years of complete estrangement which ended when I popped round to this very house for a simple cup of tea 5 years and 6 months ago. It felt good to have some part of him there in the wedding, in the garden full of geraniums he had tended and in the thistles in my bouquet which represented him so well: Scottish, blue, spiky and difficult to handle.

What’s the point of the following tldr, overly sincere, unfunny and quite possibly irritatingly patronising essay? Am I about to give you advice I never would have taken myself, precisely because I’m no longer in the situation you are still in? Yep. You should know by now that Open Letters aren’t really letters, if they were they wouldn’t be open and on the internet. This is about me and this is an opportunity for me to over-share my opinions and dirty laundry. It even ends with lyrics from a Neil Young song. Stay tuned if you can bear it. I blame the fact I’ve got partial facial paralysis, am on a lot of steroids and have subsequently been relieved of childcare duties for two whole days, enabling a stunning return to being able to actually hear my own thoughts for more than 2 minutes.

As I imagine many children of divorced parents with peripheral or complicated and upsetting relationships with their fathers feel, I spent the majority of my life until my father died intent on denying any similarity with him whatsoever. It’s extremely difficult to make a positive identification between you and the person who provided 50% of your genetic material when you experience their behaviour as uncaring. I was knocked sideways after my father’s death by the realisation of how determinedly I had punished him by withholding my love from him. For many years I was very angry with my Dad and for valid reason. Later, we had established a new relationship, predicated essentially on me going to visit him because I was bored / lonely / sad, to drink cups of tea and eat all his biscuits and listen to him telling me wild and fascinating tales of his young adulthood in Australia, riding horses bareback and tripping on acid while riding a motorbike and throwing bread to the pigeons. Sometimes he’d talk about his childhood in the tenements of Glasgow, bone achingly poor, hungry and cold, terrified of the majority of adults in his world, often subjected to brutal violence. Rarely he’d share anecdotes about his later years living as an old Western man in Bangkok, I didn’t like these stories about “hookers” and bizarre friends with names like “Cherokee Charlie”, the descriptions of whom always conjured up images of a kind of One Flew Over the Cuckoo’s Nest-meets-The Beach in my mind. He seemed to get that I wasn’t a keen audience to this kind of story, but in his characteristic style would occasionally find it irresistible to test the waters. There were numerous things about my Dad which I disliked, many which pissed me off and some which infuriated me. But the time shared in common ground was priceless.

During these few short years of harmonious and mutually beneficial contact, I determinedly never replied when he told me he loved me, I made an effort to one-arm hug him. I don’t know if he noticed or if he accepted that was his dues. He was ill for years with Parkinson’s, but when he became ill enough to warrant hospitalisation with what turned out to be pneumonia, our relationship made a radical shift. I watched him sobbing in desperation as he sat crumpled into his sofa, describing the pain in his chest to his best friend, confessing how terrified he was of climbing the stairs each night, communicating in every way other than spelling out “please end this”. The walls I’d put so much energy into maintaining in my heart were smashed through by the strength of compassion it’s impossible not to feel when you see a fellow human in such sad desperation and fear. I felt physically sore in my chest. Later, finding an empty milk bottle so that my brother could help Dad pee into it, rather than face the effort of the 8 metre stagger to the bathroom, I crumpled.

That same evening, I explained to my brother that I felt an awful lot of painful compassion for Dad but that I found it hard to respect him. In hindsight this seems like a fine enough position and one I wish I’d been able to connect with sooner, but perhaps it surfaced when the time was right. Over the following weeks visiting him in hospital, my compassion and his vulnerability paved the way for frequent and genuine expressions of love, remorse for the wasted past and deep sadness for the lost future. Those harrowing hospital days filled me with a haunting sense of Orpheus glancing back towards Eurydice. Leaving him there so terrified and vulnerable felt like abandonment to the gates of hell.

It’s easier maybe, definitely much simpler, to reach a place of peace and acceptance of my difficult father now he’s dead. Some would say this is an attempt to white wash the past or to re-write history. I would say it’s a choice to salvage the beauty and the positives from a chaotic family history and to cherish the multiple and various good things that truly existed in my father, and to acknowledge his very real love and care for me, expressed in the ways he expressed it and felt by him as he felt it, rather than by contrast to my (probably quite reasonable) ideas of what that should have looked like. I say this is easier now he’s dead for two reasons:

Since he died, I’ve discovered whole new elements of my father’s love for me which I previously had no idea existed. People have shared stories of his devotion to me when I was a baby. I’ve learned how much he loved and missed me everyday of our 10 year estrangement – something I would have refused to believe prior to his death, still measuring how he did behave against how I thought he should have behaved, rather than accepting that sometimes people love people but are completely ineffective at communicating that in an intelligible way. My sister has told me how boring phone-calls with him became since I came back into his life, as every time she took the time, effort and expense to call him from Australia all he wanted to talk about was me and he never asked her anything. My brother has helped me remember my father was bi-polar, which doesn’t excuse poor fathering and mad behaviour but goes a fuck of a long way towards explaining at least some of it. They both explained how broken he was by the loss of me and our brother, and I realised that this brokenness often unfortunately manifested itself in behaviour which made us distance ourselves from him further. I’ve read poems, aching stanzas of EE Cummings, painstakingly copied out in shaking hand, all in capitals and full of the sincerity and truth which I recognise from finding that another’s words express something I can’t.

HERE’S THE PATRONISING ADVICE: phone your Dad, if you can. The worst that can happen is he’ll prove he’s a COMPLETE twat, at least then you’ll know and you can always check again in case he stops being one when he’s dying. There’s also a strong possibility that he’s maybe only 80% twat and that he’s got nice biscuits, which you should eat all of to compensate yourself for his failings as a father.

Bonny with a paralysed half face, 30 years-old and blissfully alone listening to Neil Young on her 6 month wedding anniversary to a brilliant man.

3 thoughts on “An Open Letter to People with Twat Dads”

They Ruin Your Life

They Ruin Your Life